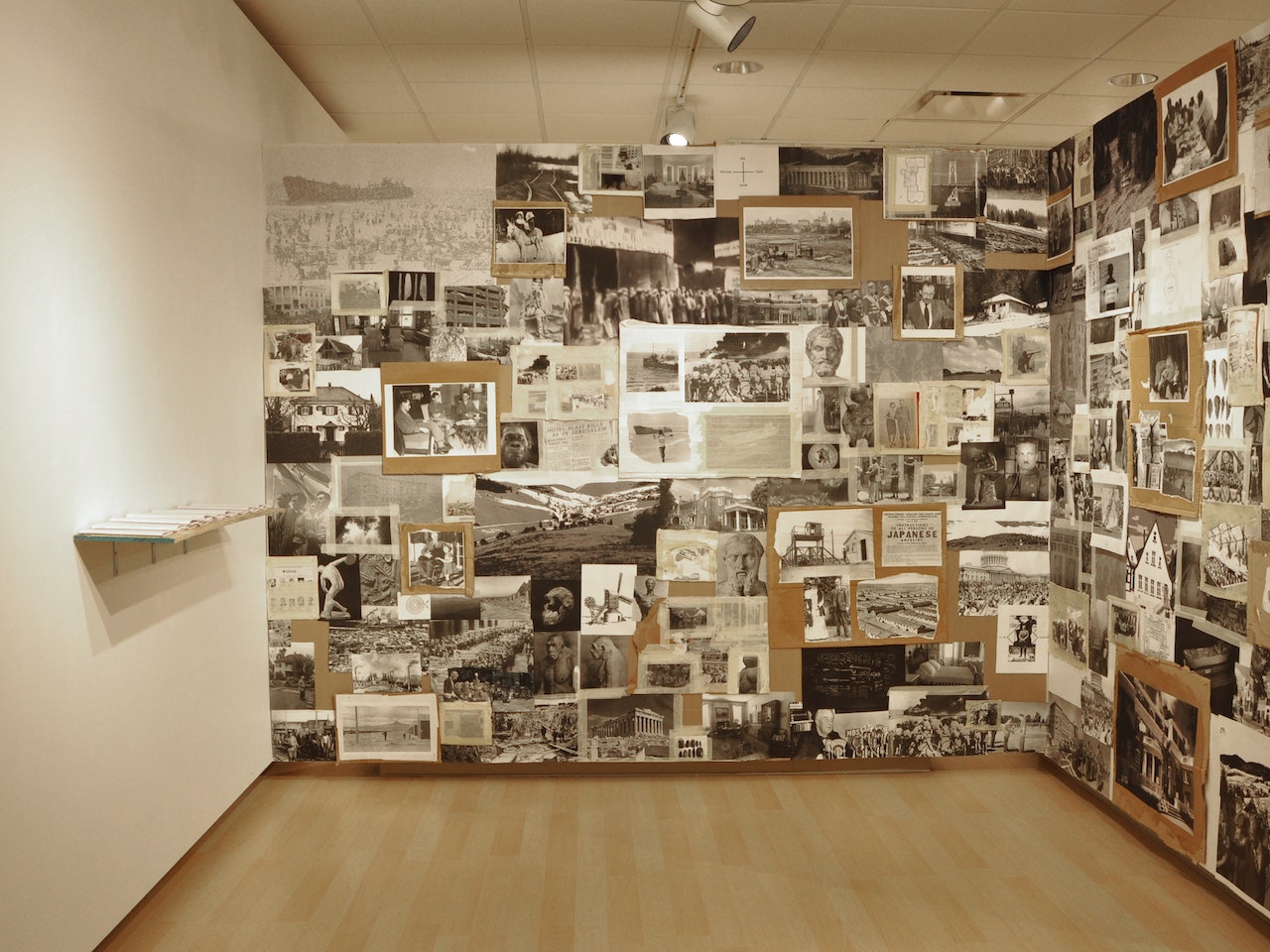 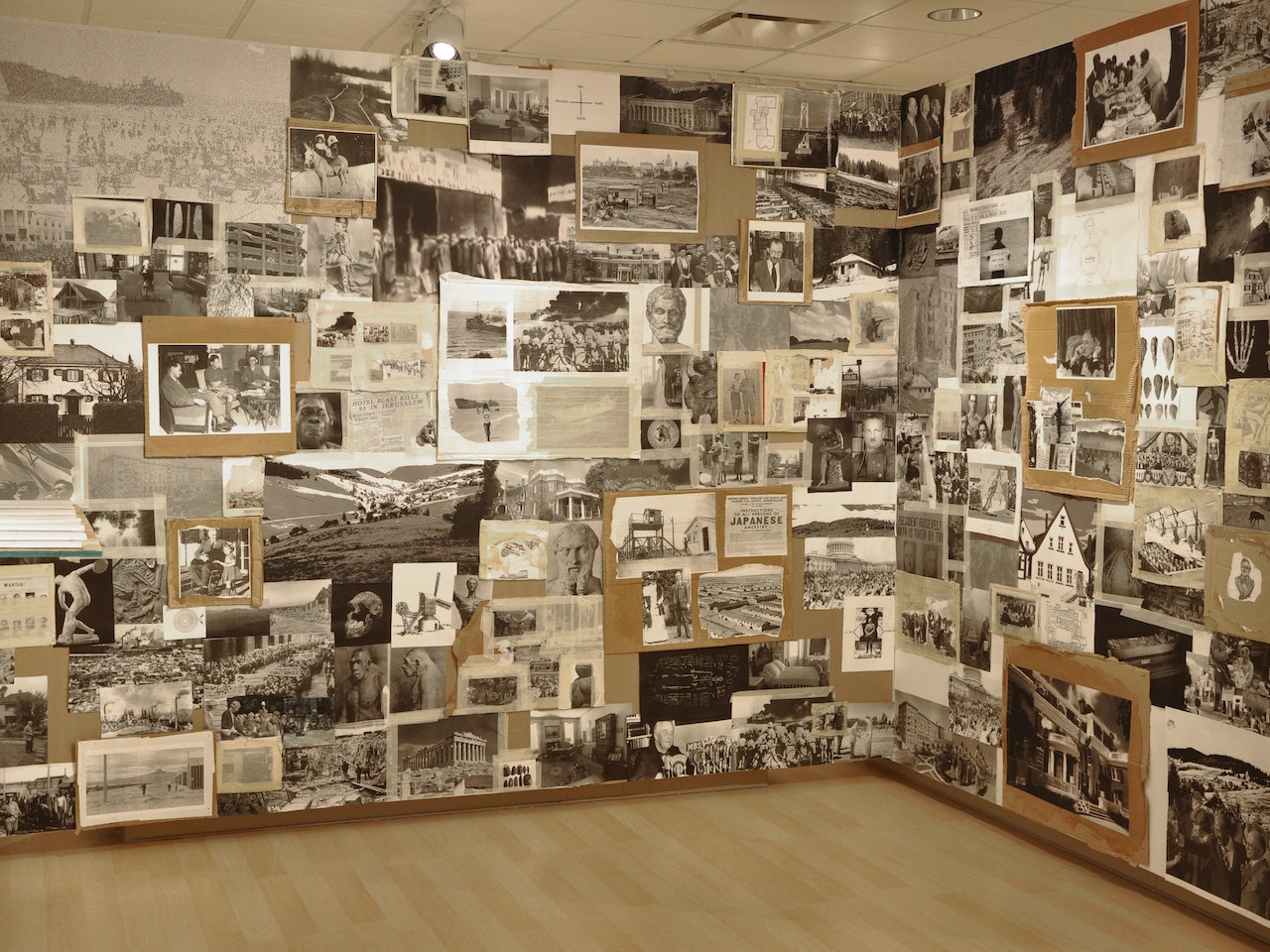 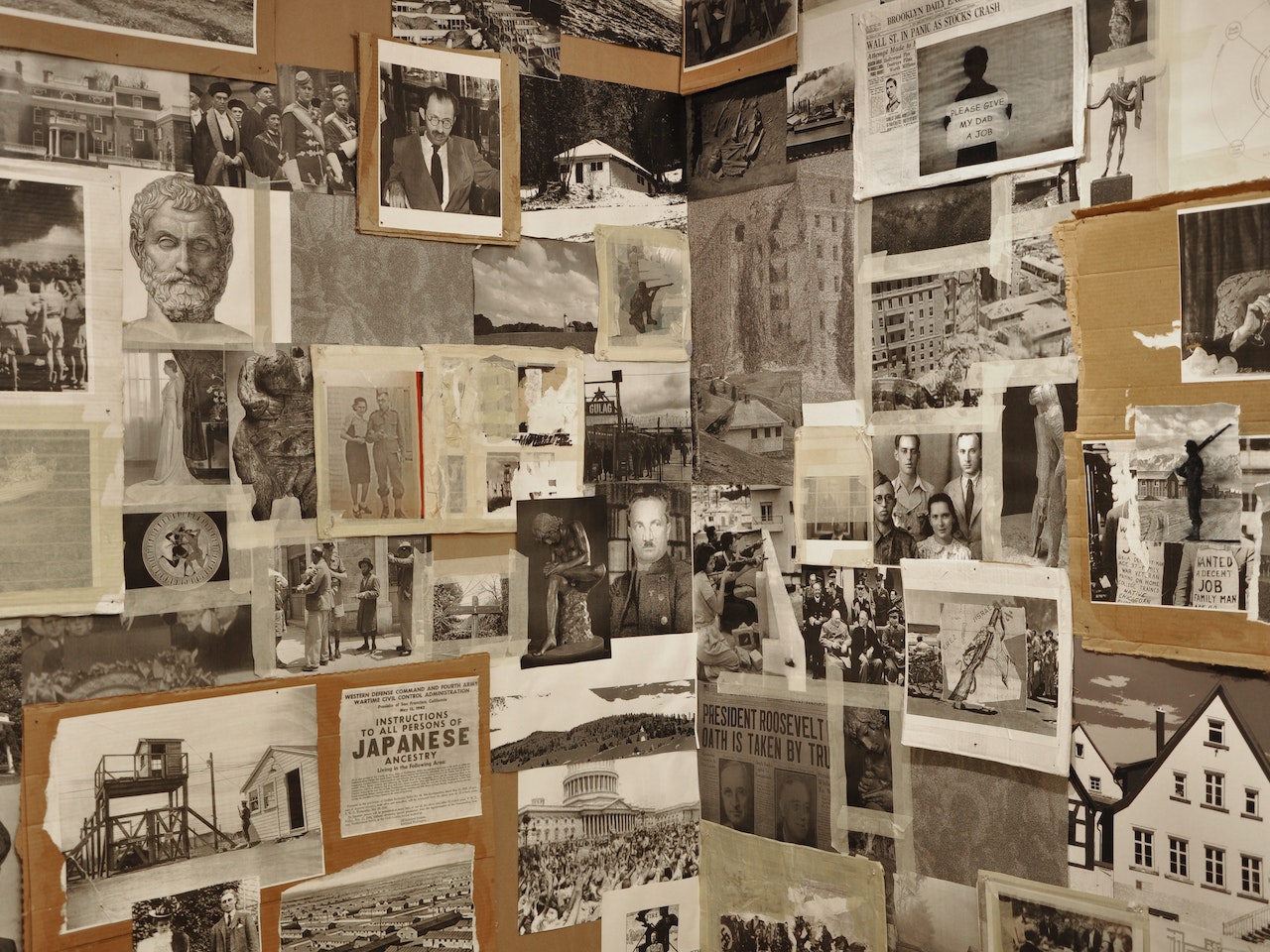 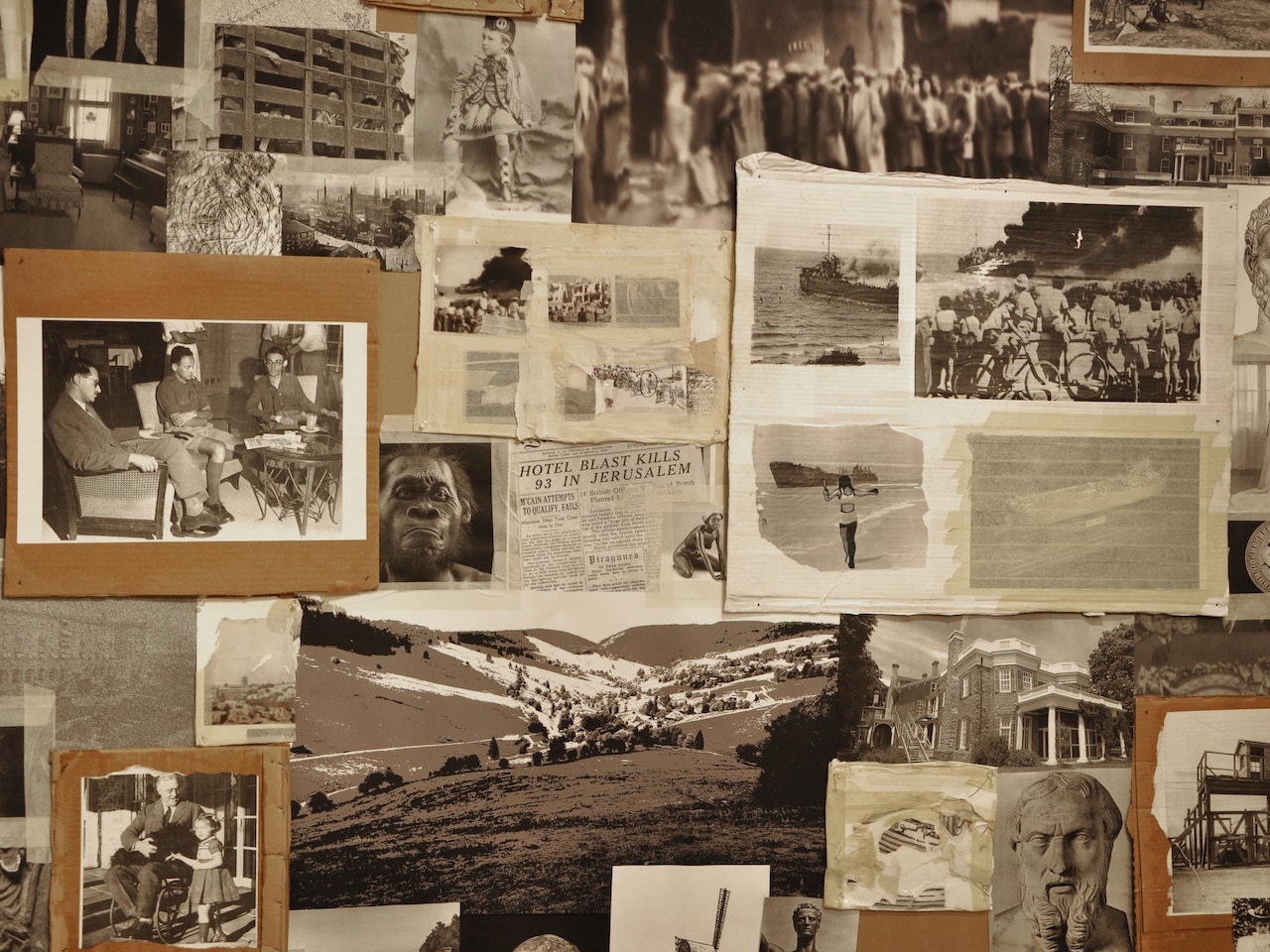 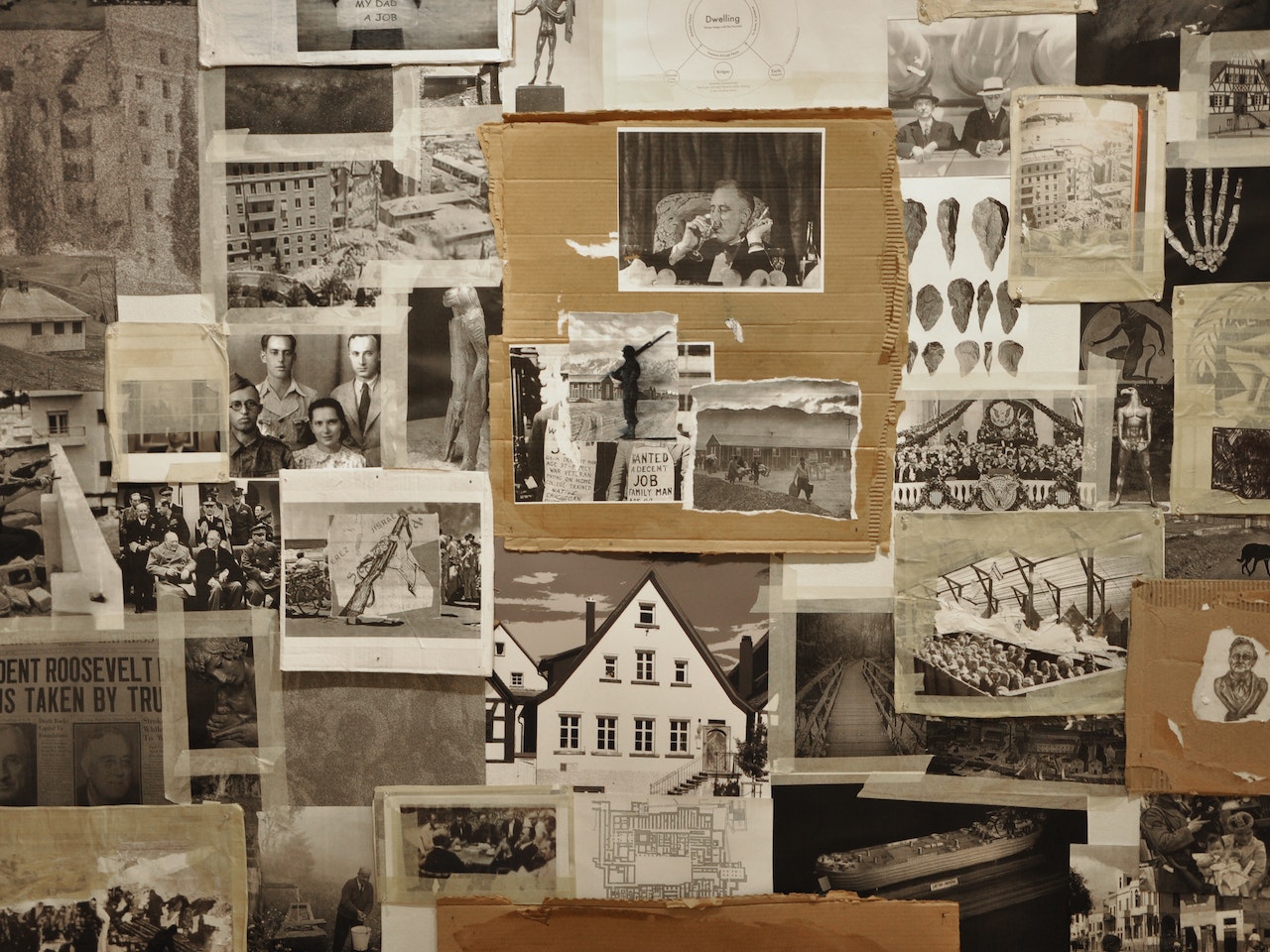 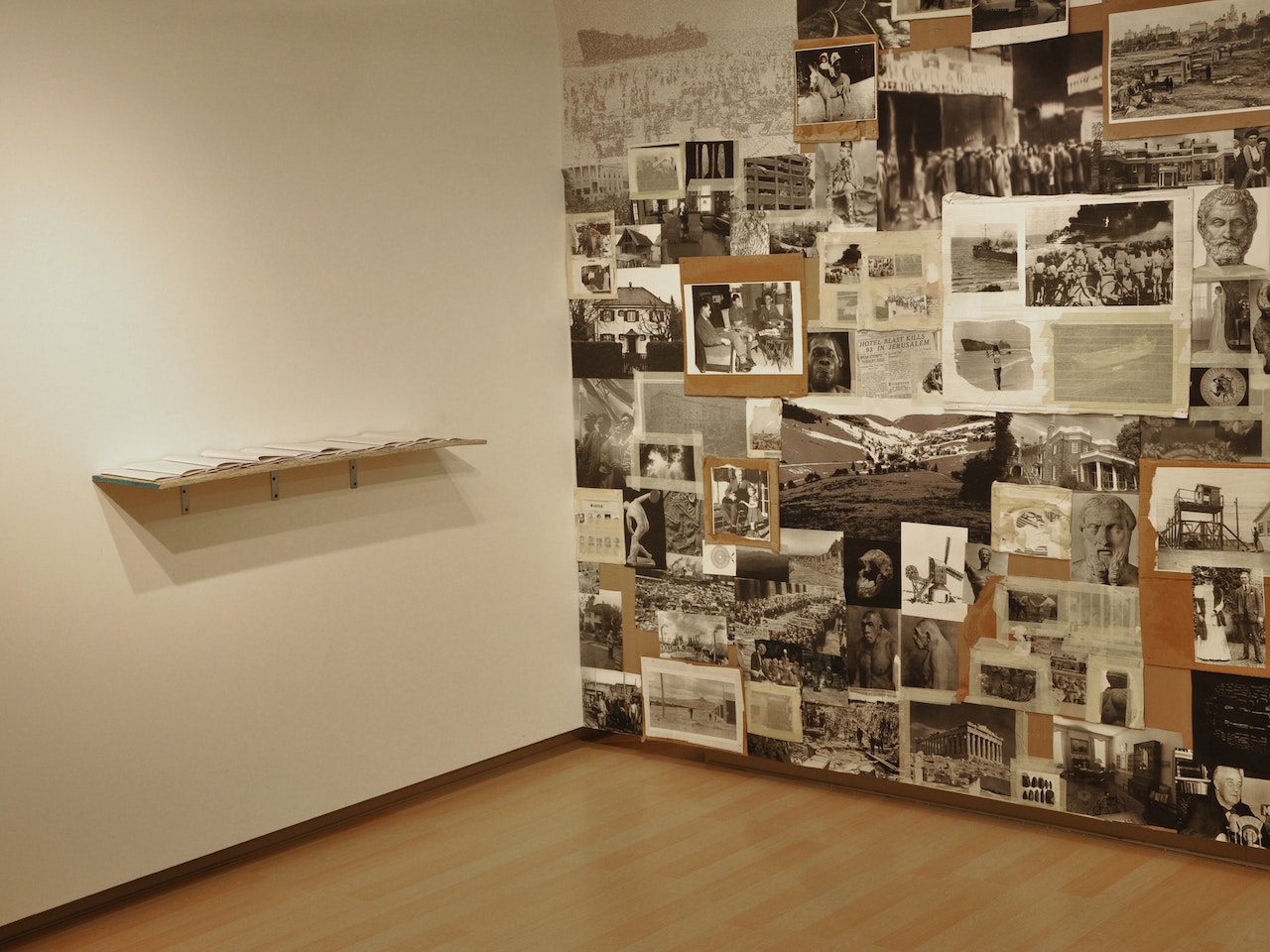 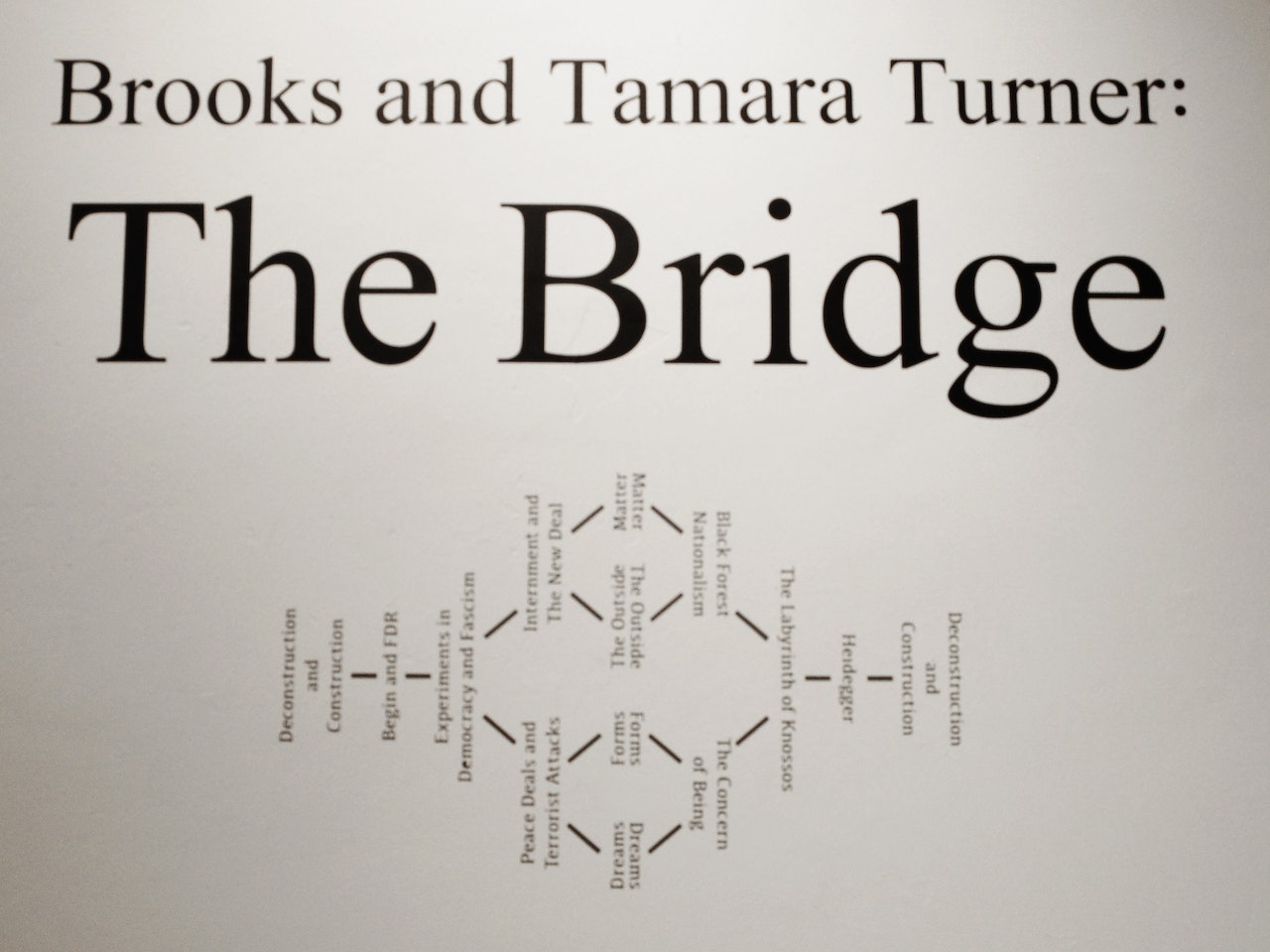 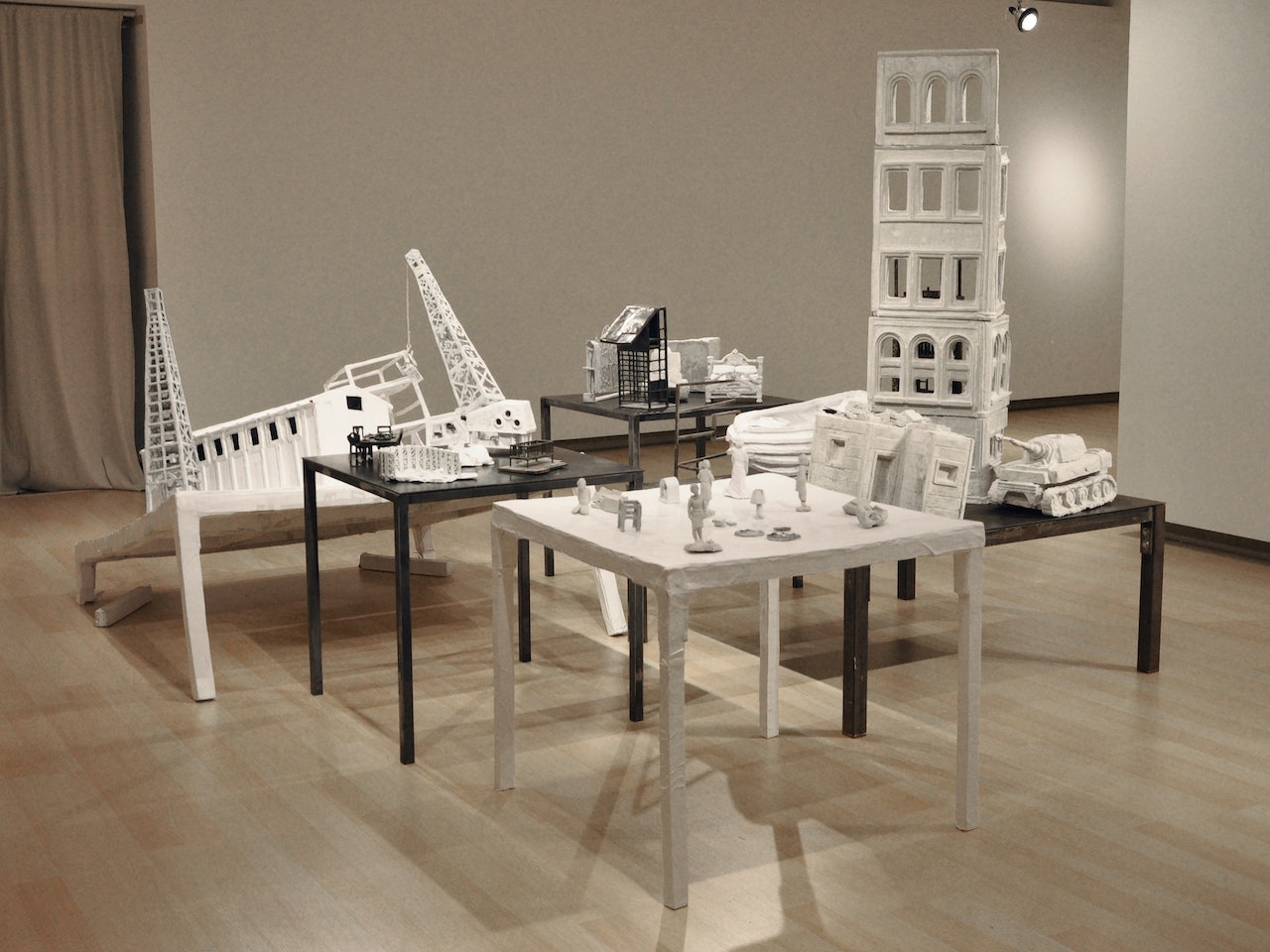 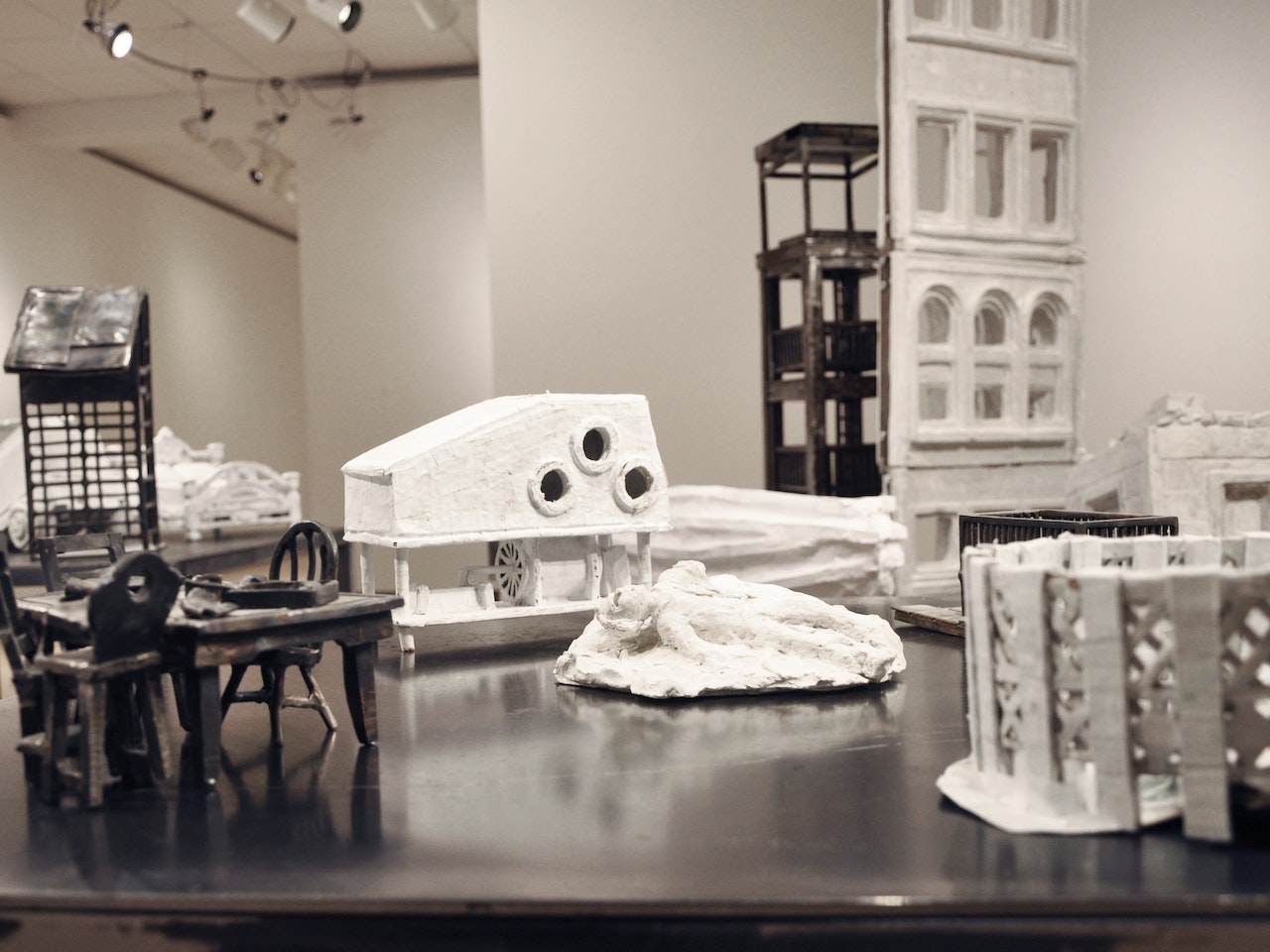 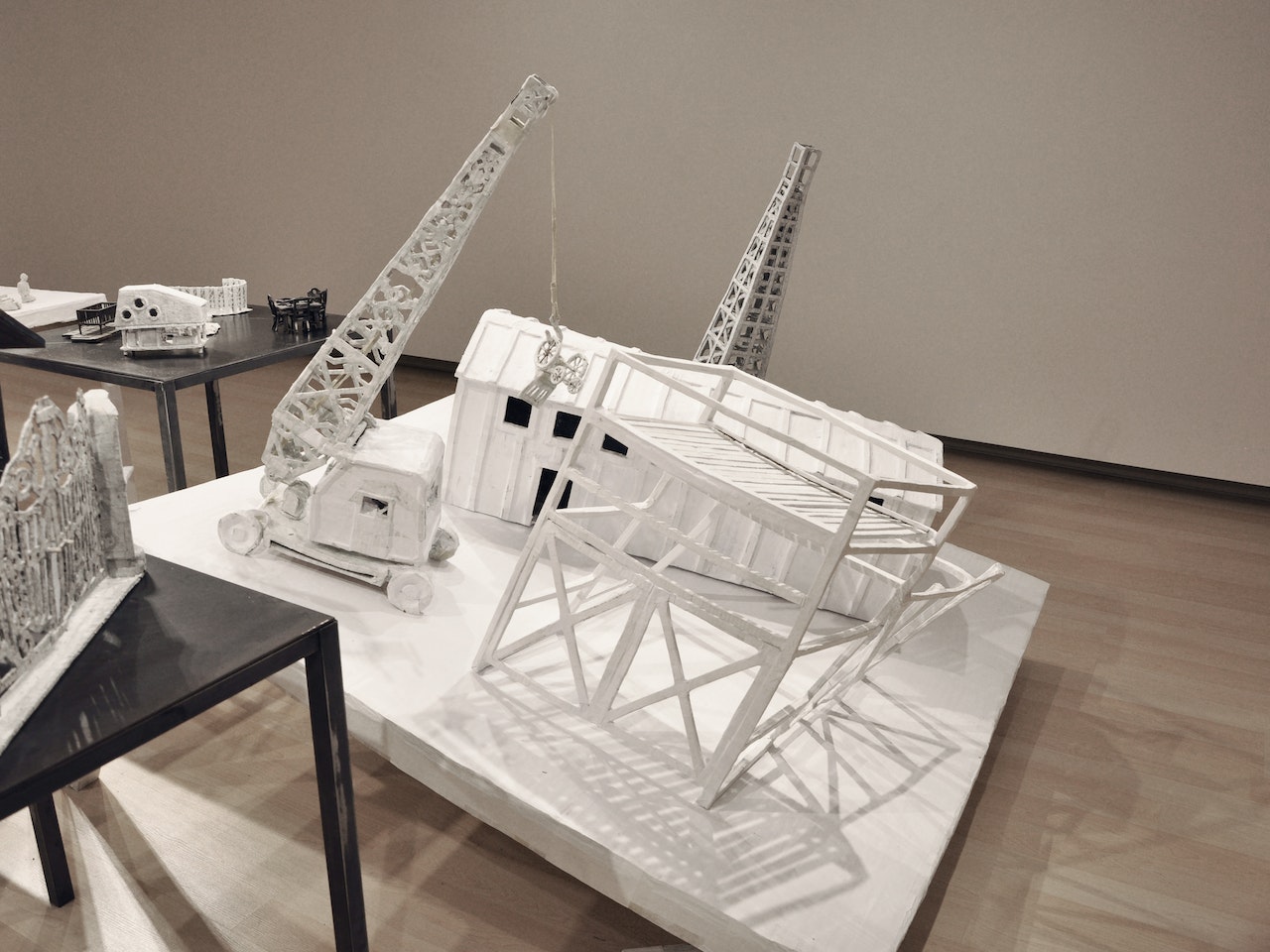 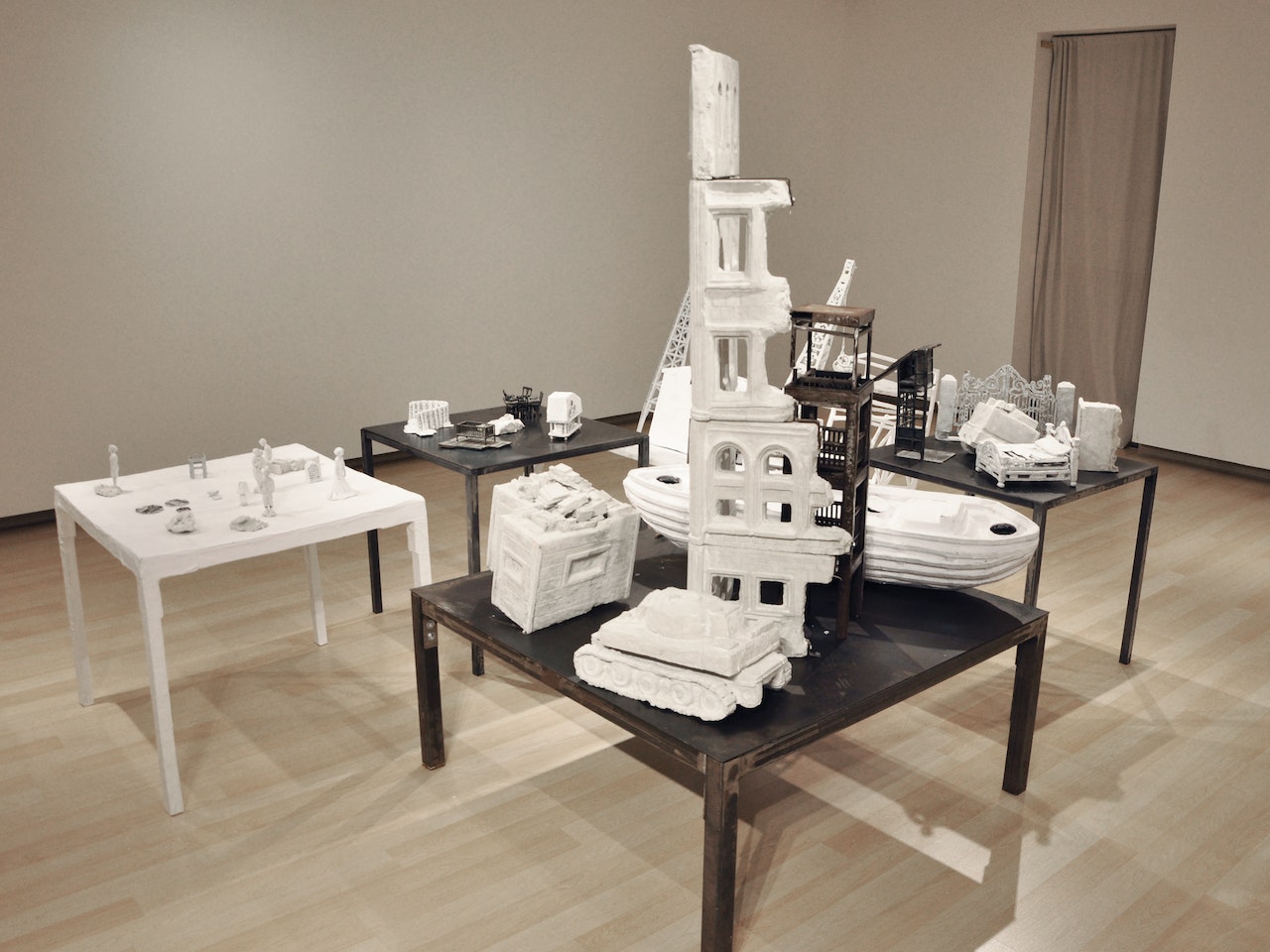 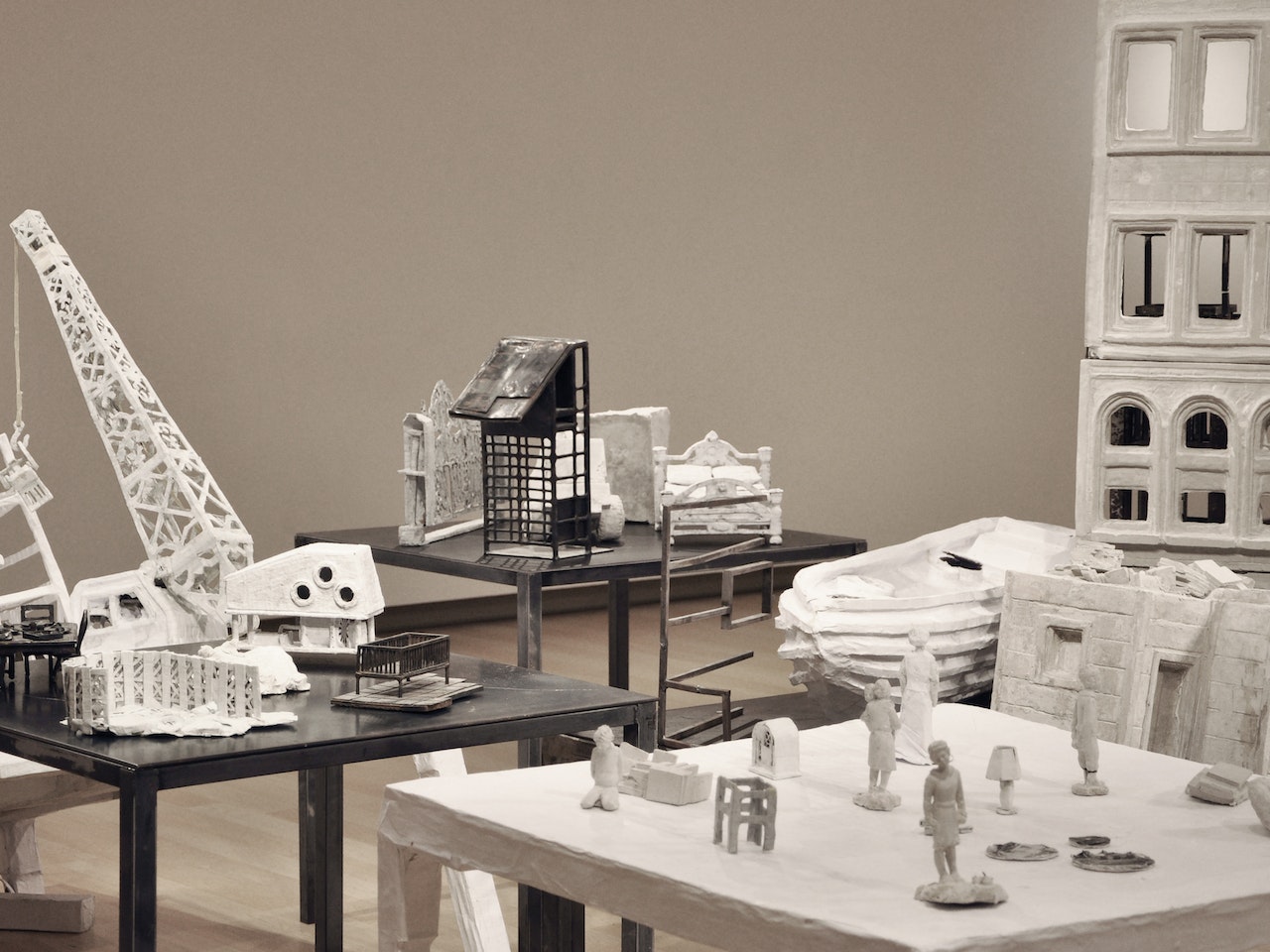 The Bridge is a collaborative installation created with Tamara Anne Turner that formed the center of a two-person exhibition of the same name exhibited at St. Mary's University of Minnesota. The installation collages together photographs, drawings, diagrams, and other research materials, obscuring the walls and enveloping the viewer in the fragments of a world, both past and present, real and imagined. A mother holding her child, a hut on a wooded hillside, nazi soldiers marching, a ship on fire, a bombed out building, classical figurative sculpture—these images form an open network of narratives, representations, and references (some of which can be seen rendered three-dimensionally in the installations In the Realm of the Political Wilderness by Tamara Anne Turner and in my work Labyrinth) tying the sculptures to historical and philosophical realities across time and space. Additionally, take-away books are situated on a shelf called The Bridge: A Lexicon. This text can be read at The Bridge: Lexicon.

As an exhibition, The Bridge brings history, politics and philosophy together in one space through the conceptual and aesthetic examination of three figures and their historical context: Menachem Begin, Franklin Delano Roosevelt, and Martin Heidegger. While none of these men met, their lives are connected spatio-temporally by World War Two and conceptually by fascism.

Heidegger’s phenomenology presented a radical new way of seeing and understanding the material world through linking consciousness to the landscape. He inspired radical humanist thinkers like Hannah Arendt and Jean-Paul Sartre despite a lifelong commitment to nationalism, including Nazi party membership. Menachem Begin and Franklin Delano Roosevelt enacted opposite structures of modern democracy in their leadership positions; both stood for "freedom" while imposing fascistic policies. Begin forcibly removed non-Jews from their homes in Israel while working to end the plight of Jewish refugees worldwide; Roosevelt interned Japanese Americans after putting in place social policies that created the middle class and protected the most economically vulnerable Americans.

When we look closely at the history of modern democracy, fissures driven by fascistic impulses begin to appear. European philosophies and mythologies, rooted in patriarchal systems and symbolized through the lives of these three white men, continue to design the political and philosophical realities of the western world today, encouraging, often inadvertently, these fissures to grow larger and more threatening. By entering the philosophical and historical labyrinth of the past century, we seek to loosen the lives of Roosevelt, Heidegger, and Begin from their historical moorings, revealing the often overlooked correlation between celebrated western ideologies and the growing threat of fascism in our world today.